"An honorary prize was awarded to two people at the Icelandic Equestrian Association’s 2012 ‘Harvest Festival’. The prize was awarded for their longstanding and dedicated service to the Icelandic horse all over the world. The recipients were dr. Ewald Isenbügel, the Swiss veterinarian, and Eyjólfur Ísólfsson, the riding instructor and trainer. Unfortunately, neither of them were able to attend, but Eyjólfur’s nephew, Ísólfur Líndal Þórisson, accepted the prize on Eyjólfur’s behalf. 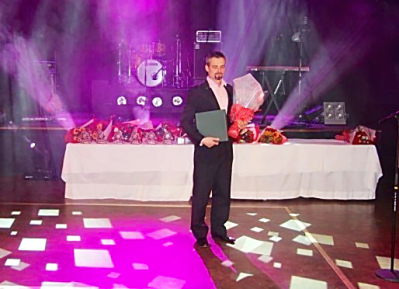 Samúel Örn Erlingsson paid tribute to Eyjólfur at the harvest festival, listing some of his accomplishments, and gave us his kind permission to publish his talk here on our homepage:
Eyjólfur Ísólfsson got to know the horse as a child, and has worked as a trainer and riding instructor for over 40 years, at home in Iceland and abroad. He has been a major influence on modern riding.
He is a founding member of the Trainers Association, and shaped its operation greatly.
When a new period of progress began in Iceland in the 1970s he was a major influence on the development of horsemanship. Eyjólfur’s objectives and training methods were crystallized in a watershed competitive showing, and memorable victory, in B-class (four gait) at the 1978 Landsmót at Thingvellir, riding Hlynur from Bringa.
Many other achievements could be listed, but mentioning his victory in tölt, riding Rás from Ragnheiðarstaðir, at the 2002 Landsmót at Vindheimamelar will suffice. That same year Eyjólfur was chosen Rider of the Year.
Eyjólfur has worked at Hólar University College for about 20 years, most of that time as Chief Riding Instructor. He has played a key role in the professional structuring of the program. The changes that have occurred in the education of professionals within the sector during these 20 years are greater than anybody could have anticipated. Hundreds of trainers, and over a hundred riding instructors have graduated from Hólar University College since a dedicated department for Equine Science was founded in 1996.
Eyjólfur has devoted himself to this undertaking, and used the best of Icelandic riding traditions as the foundation of his work, but has moreover sought out ideas and methods from all over the world, tested and adapted them, with the objective of developing horse-friendly, sophisticated, and effective training methods.
Eyjólfur’s philosophy of horsemanship is best summarized in his own words:
“All work with the horse must be founded on the horse trusting the man. Horsemanship must appear easy in order to be beautiful and desirable”."