In The Hands Of The Master

"The Tölt Event at Landsmot at Vindheimamelar is well under way when Eyjolfur Isolfsson enters the track with the mare Ras from Ragnheidarstödum. Everyone notices. This horse looks different from most  horses that have already been seen: it’s  a different riding style.
Ras starts off in dancing slow tölt with great willingness and expression, but soft and supple. She responds to her riders every aid, be it restricting or encouraging: the harmony is perfect. And guess what? They haven’t even finished the first long side of the oval track before the spectators start to applaud! This has never before happened in a Tölt Event, at least not that I can remember. Applause for a horse in slow tölt, why? 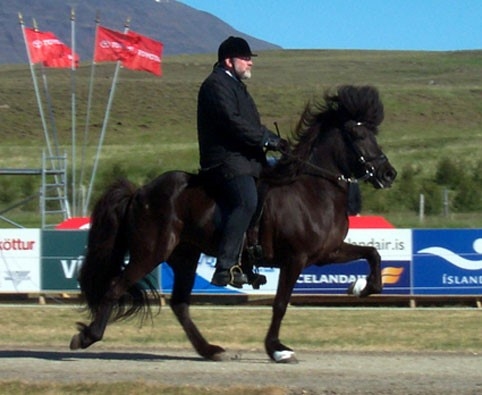 Yes, Eyjoflur showed us precisely how exact and professional work over a longer period of time produces results in the training of a horses. His riding was exceptionally beautiful; it really showed the hands of the master. It was true, slow tölt, dancing and soft with great willingness and marvelous co-operation.
Never disregarded his own convictions
After the pre-rounds, Eyjolfur had the highest score in the Tölt Event, and in the finals he won confidently. But this is not the first time he won the title all riders dream of. At the 1978 Landsmót in Skógarholar he did the same with Hlynur from Akureyri. At the time his riding was considered revolutionary: people had hardly ever seen such polished style. And the same was said now. People saw something different and large then ever had been seen before in Icelandic riding.
Eyjolfur has always been a bit different from all other Icelandic riders. He started out with the old Icelandic tradition but soon adopted dressage exercises for training Icelandic horses. He has always been convinced that a well-trained horse is not afraid and works together with his rider of his own free will.  Or, in his own words: “When a horse is doing well, he need to feel well, and if riding is to be beautiful, is has to be easy and light”.
He also says that a food psychological balance is a requirement for concentration and the muscles can not be tense, it they have to generate supple movements. “Johann Friðriksson in Kápan  and Geiri at Gufunesi knew this very well. Both of them had good knowledge of sports and made use of it with the training of their horses” says Eyjolfur.
Eyjolfur has studied foreign riding traditions and training methods, and today he mixes Icelandic tradition with classical riding and with what is called “Natural horsemanship”.( a term describing people all over the world who start their training for the point of view of the horse).
A wonderful “Gædingur”
Ras from Ragnheidarstödum was bred by Arnar Gudmundsson from the tack shop Astund. She is by Orri from Þúfu and out of Krás from Laugarvatni, a mare Eyjolfur trained at the time, a wonderful riding horse like her daughter. Eyjolfur does not want to comment a lot, but about Ras he says: “ It is a privilege to train such a horse. This is the third year I am working with her. We have become great friends and work well together. She always come to me in the meadow. To me, it is very important that horses trust me and want o be with me. I get upset if a horse tries to avoid me”.
As mentioned before, Eyjolfur has tirelessly studied and tried out all kinds of starting and training methods. People use to think he was very strange when he did things that are now considered common.
Eyjolfur´s newest project has been to teach Ras the Spanish Step., where the rider gets his horse to lift his front legs up and forward in walk. This leg action is very exaggerated and the exercise is first and foremost a show item, but if is very collecting and increases the lightness and the concentration.
In case of Eyjolfur and Ras, it is quite safe to talk about mutual trust between man and horse. It seem the mare is delighted to do her best for the rider. Everybody remembers when they presented the Spanish step at the Anniversary Show of Fakur last spring. It really showed that Ras enjoyed this game. And that  is what true riding should be like: mutual trust and co-operation.
Her Highness's Trainer
At the Holar College, a special presentation of Icelandic horses was arranged for the Princess Anne of Great Britain and her entourage. As head riding teacher of the college, it was Eyjolfur´s job to take care of this introduction. The horse that the Princess rode was not a bad one at all: it was the grey stallion Töfri from Selfossi. She rode him both during some tours in Hjaltadalur valley and at the Landsmot. What kind of impression did Eyjolfur get of the Princess?
“Princess Anne is a great rider. She learned instantly how to ride tölt and developed that skill quickly. She was very interested in the Icelandic horse and asked many questions. She wanted to go deeply into matters. Is was very nice and interesting to talk to her. She is a very friendly woman.”

You selected the horse for her, why did you choose Töfri?
“It’s difficult to choose a horse for a Princess, but I think I succeeded quite well. First of all, Töfri is grey, a colour that was earlier considered suitable for important people. He is a stallion with 9.0 for all gaits, and 9.5 for slow tölt.  His character is exceptionally reliable and he has great willingness, but he is also sweet. That is the kind of horse that suits royalty. Obviously, I tried him out carefully myself before the Princess mounted him”, said Eyjolfur."